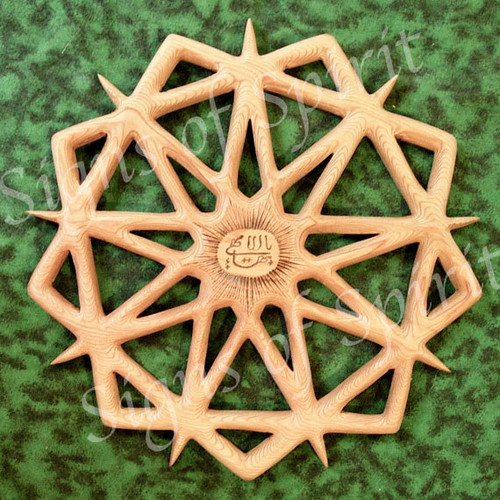 MEANING: In this variation, the 2 types of nine pointed stars are overlaid one another, creating a beautifully lacy symbol of Baha’i. Coop left the center solid so Katrina could wood burn ‘The Greatest Name‘ in the center. The symbol known as Greatest Name is an Arabic calligraphy usually translated as "O Thou the Glory of the Most Glorious!". This rendering was originally drawn by the early Bahá'í calligrapher Mishkin Qalam and later adopted by Bahá'ís everywhere. There is no particular design of the nine-pointed star that is used more often than others. The most commonly used symbol connected to the number 9 used by the Baha'i is the nine-pointed star and is generally used as a symbol of their Faith. Nine, as the highest single-digit number, symbolizes completeness. Since the Baha'i Faith claims to be the fulfillment of the expectations of all prior religions, this symbol is used in many variations in the (nine-sided) Baha'i temples.

WHAT IS BAHA’I: The Baha'i Faith is a monotheistic religion that emerged in the nineteenth century. It puts forward that many major religions in the world today are part of a progressive revelation from God, and it considers such diverse figures as Krishna, Zoroaster, Abraham, Moses, Buddha, Jesus, and Mohammad to be divine messengers sent by God to guide the world's spiritual development. Bahá'u'lláh, the latest of these Messengers, brought new spiritual and social teachings for our time. His essential message is of unity. He taught the oneness of God, the oneness of the human family, and the oneness of religion. Baha'is emphasize unity among all of mankind and strive for a united world society. In working toward this goal, the Baha'is vigorously engage in social programs and education that promote racial and gender equality, religious tolerance, environmental responsibility, and improved economies for those in need.

INSPIRATION: Every year, Coop returns to Chicago for a time to visit with his family that still lives there. Normally, all we do is eat hot dogs, chinese food, and deep dish pizza, but in 2011 we tore ourselves away from the kitchen table and Coop took me to the Baha’i Temple in Wilmette, IL. It was, amazing. We just sat there and breathed for a long time, inhaling the tranquility of the place and looking at the wonderful designs throughout the space. At the very apex of the dome is a large lighted version of the ‘Greatest Name’. Coop had already been doing the 2 single versions but once he saw the double version he just had to try it and the glowing calligraphy was so beautiful that had to be done too!

THE CARVING: My wood carvings are single pieces of western red cedar, designed and carved to be wall hangings. Each piece is finished with a blend of clear oils that brings out the natural color of the wood. For more information on the process of creation, please see my profile.

SIZE: One picture has the piece on a quilting board, lined up on the 1 inch marks. So subtract 1 inch from the height and width for the stock size. Measurements may vary slightly from piece to piece. Please contact if we don't have your country listed for shipping outside of the U.S. International orders will be sent Parcel Post.