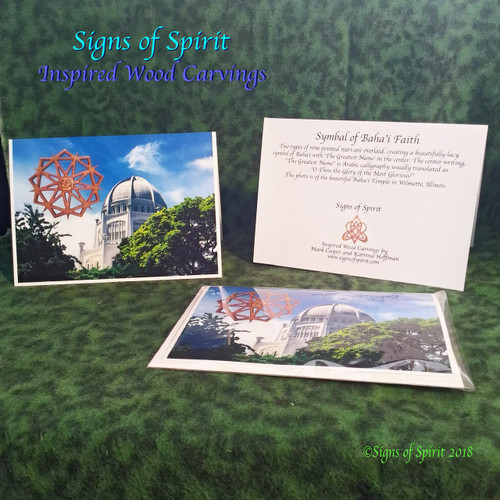 SKU:
UPC:
Bulk Pricing:
Buy in bulk and save

Greeting Cards created from photos of wood carvings by Signs of Spirit.  A picture of the wood burned Double Nine Point symbol of Baha’i wood carving was taken and manipulated in Photoshop. It was then layered on a background of a photo taken at the Baha’i Temple in Wilmette, Illinois during our annual visit. The back of the card has the meaning of the knot, leaving the inside blank for you to use.

The card is printed on a 7 X 10 inch (folds to 7 X 5) A7 Greeting Cards 60lb. Polar Matte Inkjet Card stock .You will get card and envelope inside of a cellophane sleeve.

The pictures here have watermarks…they won’t be on your card.

MEANING OF SYMBOL: In this variation, the 2 types of nine pointed stars are overlaid one another, creating a beautifully lacy symbol of Baha’i. Coop left the center solid so Katrina could wood burn ‘The Greatest Name‘ in the center. The symbol known as Greatest Name is an Arabic calligraphy usually translated as "O Thou the Glory of the Most Glorious!". This rendering was originally drawn by the early Bahá'í calligrapher Mishkin Qalam and later adopted by Bahá'ís everywhere.

There is no particular design of the nine-pointed star that is used more often than others.