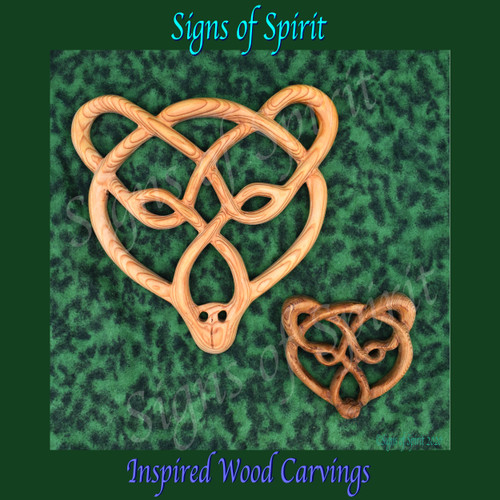 Coop carves this Celtic Bear Knot designed by Katrina in 2 sizes.  There are so many meanings, historical and modern to the Bear.  It can appeal to those who search for Strength; Lovers of the tale of King Arthur, Mothers wishing to fill a nursery with woodland animals as well as Big Hairy Men and those who love them!

Celtic Bear (Arth): Although the bear was native to the Isles, it is now extinct there. Evidence of its being a totem animal is found in many Celtic designs; although it is not mentioned in the legends. The word "arth", which means "bear", is the root word for the name Arthur. The bear was noted for its strength and stamina. It can help you find balance and harmony in your life, and the strength to do what is necessary.

Bear is considered a protective spirit in the Otherworld realms of dreams and death -- the mythology that surrounds it being inextricably linked with its winter retreat into caves (or the Underworld) to hibernate.  In spring, the female emerges from her winter hibernation in the womb of mother earth with bear cubs in tow. This led to the bear being associated with regeneration, rebirth and adopted as a solar symbol.  Bears are known to protect their cubs with unrivaled ferocity, using all their strength and courage to protect their vulnerable offspring.  The bear represents a symbol of the dreamtime, when we surrender to sleep and allow ourselves to be receptive and nurtured by the Great Mother.

It is said that the Vikings would wear bear skins in times of war to scare off their enemies. They would appear as powerful as these wild animals. Bear symbolize warrior spirit and courage to fight. The bear’s spirit would be invoked to help the warriors in the battle. As the bear is a fierce and powerful fighter, its name was also adopted by kings and warriors.

Healer and Teacher:  Bear is associated with shamans in many traditions, symbolizing healing abilities and stepping into the role of the healer. If Bear is making Itself known in your life, it may be time to take care of your own needs for healing, whether it’s at the physical, emotional or spiritual level. In Siberia, the name used to designate women shaman is the same as the word “bear”. In Northern America, in the Inuit tradition, the bear spirit animal is also connected to the shamanic tradition and women.

For the Inuit people, Bear is a strong power or totem animal. Some Inuit hunters believe that accepting being eaten by a bear may allow them to reincarnate as a shaman and carry the spirit of this animal. The polar bear is considered as the “Wise Teacher” as it shows how to survive in harsh conditions.

Bear Totem: As Bear is a solitary animal, having Bear as a spirit animal can mean that you find balance and comfort in solitude. This power animal coming to you can be showing that you need to refocus, set up boundaries, and become l comfortable in your own skin. Take time for quiet, rest, self-inquiry or meditation. Call on the Bear Spirit to help you find your center and ground yourself in a strong foundation that will support you in more active and frantic times.

In modern times, Bear has become an affectionate term for a subculture in the gay community. Bears tend to have hairy bodies and facial hair; some are heavy-set; some project working-class masculinity; none of these are requirements or unique indicators. As LGBT culture and modern slang take on a wider appeal in modern society, the term has expanded to referring to a hairy and burly straight man as a bear, although they would not be part of the gay bear community.However, heterosexual men who have bearish physical traits and are affirming of their gay friends and family (or their gay fans, in the case of a celebrity) may also be informally accorded "honorary" bear status.