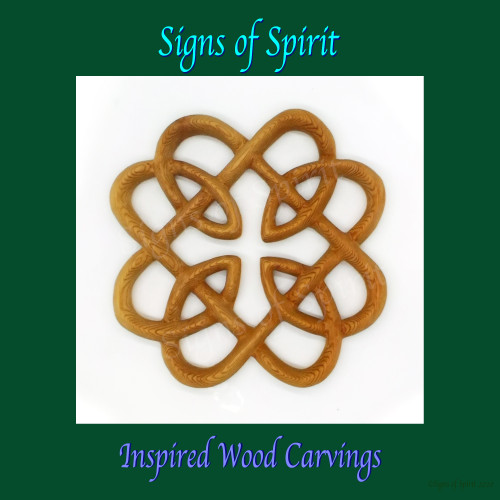 Here is an ancient Celtic Shield Knot design, found on the internet to have the modern day meaning of Fatherhood.  Coop has done a lovely job of translating this to his woodcarving art form!

Are most Ordinary men

and Singers of Song

The Shield Knot is an ancient Celtic symbol of protection. This knot was placed near ill people or on battle shields for warding off the evil spirits or any other danger. It can be made in several designs, but its uniqueness lies in its four distinct corners. A Shield Knot is usually shaped as a square or appears to be a square within a circle. Besides being a part of the ancient Celtic culture, the Shield Knot is believed to have been used by several other cultures also for invoking protective power.

What better symbol for the protection and nurturing of Fatherhood!

MSRP:
Was:
Now: $228.00
The pictures you see here are stock photos. What you get will depend on what we have in stock. If there are no others in stock, the time to shipping will be increased. If you desire and request something (for example) dark, we will pull the darkest board we have, but it will not necessarily be as dark as (for example) walnut would be. Western Red Cedar is the species from which roofing shingles, decks, and gazeboes have traditionally been made. It is resistant to mold, moisture, and insects. The oiling process also helps to block out damaging UV rays of the sun, so our carvings can be hung outdoors. Please be aware, that even with the oiling, the carving will eventually gray out, as any cedar will, if it is placed in direct sunlight.   SIZE OF THE CARVINGS: The stock carvings are limited by the size of the board that starts the carving process. As the initial piece is 1 in. x 12 in., (in reality 3/4 in. x 11-3/4 in.) one side of the carving will be no greater then approximately 11-1/2 in.