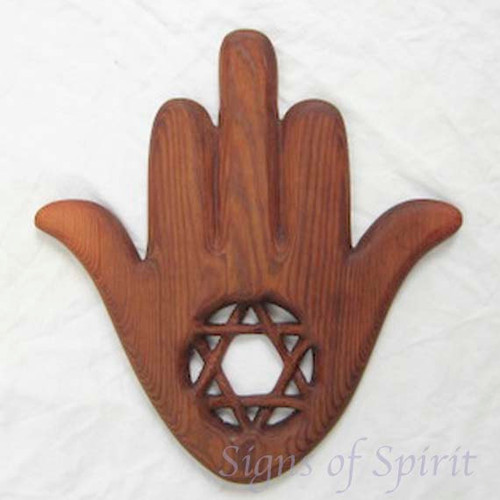 MEANING: Depicting the open right hand, The Hamsa (Chamsa, Khamsa) is an image recognized and used as a sign of protection in many societies (Muslim, Christians, Egyptians, North Africans, and Jews) throughout history, the chamsa provides defense against the evil eye. It is also known as the Hand of Fatima, so named to commemorate Muhammad’s daughter Fatima Zahra. Levantine Christians call it the hand of Mary, for the mother of Jesus. The hamsa's path into Jewish culture, and its popularity particularly in Sephardic and Mizrahi Jewish communities, can be traced through its use in Islam. This "favorite Muslim talisman" became a part of Jewish tradition in North African and Middle Eastern Jewish communities. Jews retained the Arabic name hamsa, but renamed it the Hand of Miriam, referencing the sister of the biblical Moses, so as not to reference the daughter of the prophet of Islam. The Star of David, also called the Shield of David or the Magen David, is a recognized symbol of Jewish identity and Judaism. There are many ideas about the symbolic meaning of the Star of David. Some Kabbalist thought that the six points represented God's absolute rule over the universe in all six directions: north, south, east, west, up and down. They also believed that the triangles represented humanity’s dual nature – good and evil – and that the star could be used as protection against evil spirits. The structure of the star, with two overlapping triangles, has also been thought to represent the relationship between God and the Jewish people. The star that points up symbolizes God and the star that points down represents us here on earth. Yet others have noticed that there are twelve sides on the triangle, perhaps representing the Twelve Tribes. In addition to being a sign of protection, the Hamsa also represents blessings, power, and strength. It can be displayed with the fingers pointing up or down. My (Katrina) personal feeling is with fingers up it represents protection, fingers down pours blessings upon the household. Coop keyholes the back of the Hamsa so it can be displayed in either direction. THE CARVING: My Carvings are single pieces of western red cedar, designed and carved to be wall hangings. Each piece is finished with a blend of clear oils that brings out the natural color of the wood. For more information on the process of creation, please see my profile. SIZE: One picture has the piece on a quilting board, lined up on the 1 inch marks. So subtract 1 inch from the height and width for the stock size. Measurements may vary slightly from piece to piece. Please contact if we don't have your country listed for shipping outside of the U.S. International orders will be sent Parcel Post.