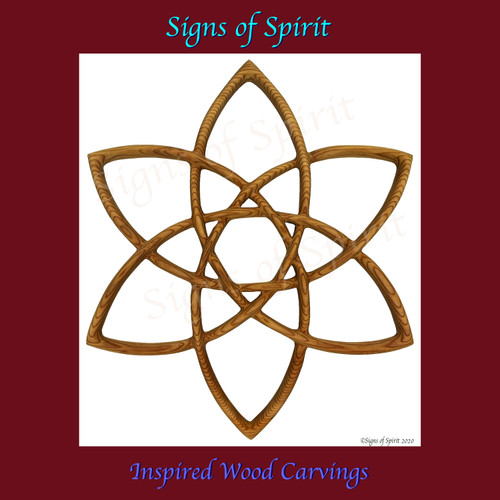 MEANING: The symbol is a combination of two of the most basic Triquetras, The Trinity Knot. Simply three arcs; originally it is believed to the early Celts, the three arcs represent the three aspects of the ancient Celtic Goddess; Maiden, Mother, Crone which reflect the Phases of Womanhood.

Later, as Christianity spread, this Celtic triangle was adapted to the Christian trinity of Father, Son and Holy Spirit.

Coop draws this Double Trinity with compass and ruler, one Trinity knot on top of the other, inverted 180 degrees. While maintaining 2 separate knots, he then weaves the trinities together.  This can then represent the finding of balance between dualities; the matriarchal and patriarchal trinities, female/male, etc.

The final wood carving also has the advantage of being very much like a six petaled flower!

SIZE: One picture has the piece on a quilting board. The quilting board, at its simplest, is a one inch grid. So with the piece on the board, you look at the top and follow the line to the left and look at the right side at the widest point and follow the line to the bottom and you have height by width. Measurements may vary slightly from piece to piece.

Double Pentacle-Humanity reaching to Spirit and Spirit looking over Humanity