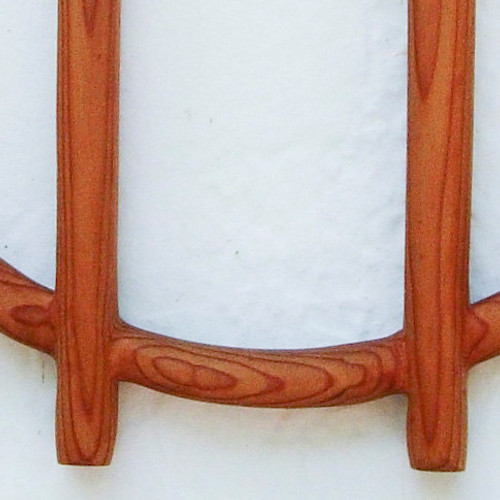 MEANING: The Druid Sigil is a circle intersected by two vertical lines (Staves or Spears). While the ancient origins of this symbol is unknown, in Stuart Piggot's book "The Druids", there is a photo of a Romano-British building, possibly a temple, located at Black Holmes, Thistleton, Leicestershire (England) in which this symbol forms the foundation.

Historically, Druids were priests of an ancient Celtic religious order. Powerful figures in the Celtic world, they served not only as religious leaders but also as teachers, judges, advisers, soothsayers, healers, and poets. The Druids held both religious and political power.

The Celts had an oral history, so we have lost many details of Druidic practices. Information (from outside) of the Druids date back to the 200s B . C . Various ancient Greek and Roman writers described the beliefs and practices of the Celtic priests, and Welsh and Gaelic poetry also provided some details. However, more complete information about the Druids comes from the writings of Julius Caesar (ca. 100-44 B . C .), the Roman general and statesman. Caesar reported that the Druids were highly respected and called on for advice and instruction. They also served as judges for most public and private disputes, from major and minor crimes to arguments about money and property. Every year, the Druids gathered at a sacred place in the territory of the Carnutes, regarded as the center of Gaul. There they settled legal matters and made decisions about awards and punishments. Disobeying the Druids' rulings led to excommunication—expulsion from the order—which was the most severe punishment.

By Caesar's account, training to become a Druid was a long and challenging process, taking up to 20 years. Those who wanted to join the order had to learn the religious laws and traditions and the philosophical principles of the Druids, memorize great numbers of ancient verses, and study the natural world and astronomy, soothsayer one who foretells events

The Druids' Teachings. The Druids believed in a supreme god, whom they called Be' al, meaning "the source of all beings." The symbol of this supreme being was fire. But the Druids also worshiped many lesser gods.

Druids, priests of an ancient Celtic order, served as both religious and political leaders.

The Druids taught that the human soul was immortal and that, upon death, it passed into the body of a newborn child.

In modern times, The Reformed Druids of North America (RDNA) is the oldest and largest Druid organization native to the United States, but perhaps the least well organized. This movement began in 1963 as a protest against coerced religious attendance at Carleton College (Now known as the ‘Mother Grove’) in MN. The RDNA is known for it's lack of dogma, a loose hierarchy, eclectic traditions, a wry sense of humor, well archived numerous publications, and having spawned many well-known spin-off groups.

What is Reformed Druidism?  It is that feeling when you see a little bird hatching from an egg in the spring. It is a deep personal drive for religious truth, a drive so important that you will follow it no matter where it takes you. It is a journey, perhaps with occasional wayside rests, but still a journey whose only distant destination is truth. If this seems helpful, take heart. A complete explanation would take volumes, in large part because if Reformed Druidism is one thing, it is something unique to every practitioner.

While the RDNA may have been early in the U.S. movement, there are organizations spun off from the Druidic Reformation, following the Druidic Revival, and/or Neopaganism, many use the Druid Sigil.