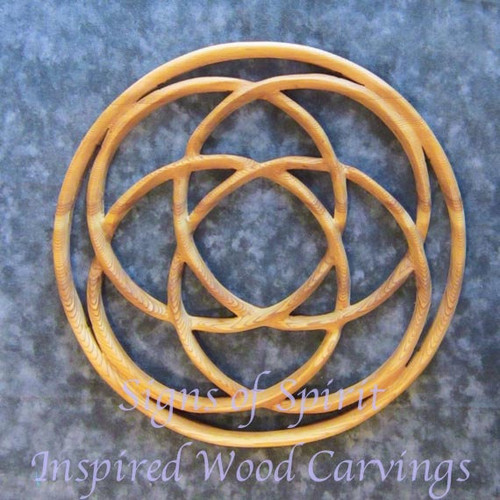 MEANING: The four circles signify the Seasons and their importance in the Celtic calendar. In the “Old Religion” it also described the Wheel of the Year with the four Greater Sabbats: Samhain, Imbolc, Beltane and Lughnasadh, and the four minor Sabbats: Yule, Ostara, Litha and Mabon. On another level, every number has a certain power. The symbolic meaning of number Four deals with stability and invokes the grounded, balanced nature of all things. Consider in addition to the four seasons, the four directions, four elements... This knot is an open knot, or a knot that consists of 4 separate circles interwoven (as opposed to a closed or eternity knot consisting of one line with no beginning or end). Open knots are said to represent a journey, perhaps physical, emotional or otherwise. By encircling the Knot of Four, the Seasons are put into a relationship... If you are drawn to this knot, perhaps you are experiencing an awareness in the flow of your life from one season to another, or are stepping on a new path or beginning a move.

Double Pentacle-Humanity reaching to Spirit and Spirit looking over Humanity