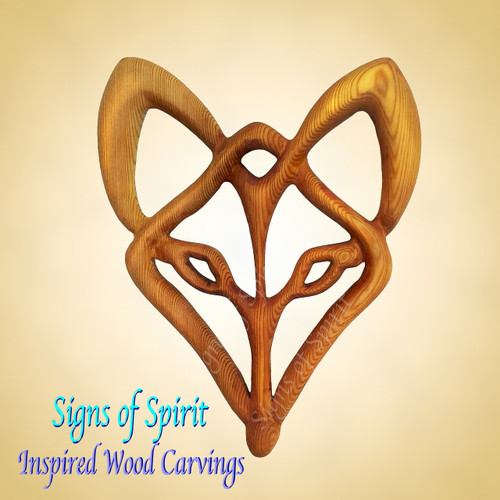 MEANING: Fox symbolism for the Celtic tradition, recognize their cunning and wily intelligence, holding Fox to be a guide and honoring their Wisdom. Fox knows the woods intimately and can act as Guide in the spirit world. If Fox appears, you may need to think quickly and strategically, employ cleverness and wisdom to adapt to changing situations. Celtic Fox may also be highlighting a need to observe others and your surroundings while remaining unnoticed. This maybe what lends Fox taking on the role of shapeshifter, changing from human to animal as needed. In being able to transform and remain unnoticed, Fox slips in and out of spots that might prove dangerous for others. In some European traditional tales, Fox is the character who outsmarts humans and other animals alike and gets away even in the trickiest situations.

Foxes are a common subject of Japanese Folklore where they are known as Kitsune. They are intelligent beings and as possess magical abilities that increase with age and wisdom. They are shapeshifters able to assume the human form. While some folktales speak of kitsune employing this ability to trick others—as foxes in folklore often do—other stories portray them as faithful guardians, friends, lovers, and wives. There are two common classifications of Kitsune. The zenko (literally good foxes) are benevolent, celestial foxes associated with the god Inari simply called Inari foxes. Inari is Shinto God of Rice and Patron of Business and Kitsune acts as its messengers and as Rain Spirits. On the other hand, the yako (field foxes) tend to be mischievous or even malicious. Another tradition classifies the Fox Spirit into one of thirteen types defined by which supernatural abilities the kitsune possesses. The more tails a kitsune has—they may have as many as nine—the older, wiser, and more powerful it is. Because of their potential power and influence, some people make offerings to them as to a deity.

Native Americans observed Fox’s ability to vanish amidst the lush undergrowth of the forest, the flora is Fox’s ally and the ability to blend into one’s surroundings and be unnoticed is a powerful gift. Another gift is the ability to adapt to winter by changing color, allowing White Fox to disappear in the snow. This ability to be unseen allows it to be the protector of the family unit. The Choctow honors Fox with the duty of keeping the family together and safe. If Fox choses to share its medicine with you, it is a sign that you are to become like the wind, unseen yet able to weave into and through any location or situation. Be wise and observe the acts of others rather then their words at this time. Use your cunning nature in a positive way; keep silent about who and what and why you are observing. In learning the art of camouflage, you need to practice and test your abilities to pull this off.

Additionally, in observing Fox while hunting, we see the entire body is pointed like an arrow -straight and tightly aimed. This brings the meaning of Focus Mindset, Determination and Right Action.

If Fox has come to your consciousness, be aware of:

Cunning; seeing through deception; call to be discerning.

Ability to find your way around, to be swift in tricky situations.

You may be called to take action in a way that shows your adaptability and ability to move quickly through obstacles and resistance.

Being inspired by a Fox totem, you can work at developing the sharpness of your mental skills: Analytical intelligence, power of deduction, observation can come into play more powerfully in how you deal with daily matters or bigger projects. Dreaming: Working with dreams is a particularly useful practice for those who have the fox as a spirit guide. The affinity with the night activities supports the connection with the dream world.

Creativity with Fox Totem: Foxes are most active at night, but also are day animals. By affinity with the animal totem, you may like to be active and bring your creativity to its peak during night time as it gives you the space to be closer to your natural state. So, no matter the culture, consensus on Fox symbolism deals with themes of Cunning, Strategy, Quick-Thinking, Adaptability, Cleverness, and Wisdom.

VARIATIONS:  We also offer a Miniature variation! The Fox Kit can fit in your smaller spaces or can be displayed with the full size for a Fox Family.

THE CARVING: Our carvings are single pieces of western red cedar, designed and carved to be wall hangings. Each piece is finished with a blend of clear oils that brings out the natural color of the wood. For more information on the process of creation, please see my profile.

SIZE: One picture has the piece on a quilting board, lined up on the 1 inch marks. So subtract 1 inch from the height and width for the stock size. Measurements may vary slightly from piece to piece.

MSRP:
Was:
Now: $265.00
!
The pictures you see here are stock photos. What you get will depend on what we have in stock. If there are no others in stock, the time to shipping will be increased. If you desire and request something (for example) dark, we will pull the darkest board we have, but it will not necessarily be as dark as (for example) walnut would be. Western Red Cedar is the species from which roofing shingles, decks, and gazeboes have traditionally been made. It is resistant to mold, moisture, and insects. The oiling process also helps to block out damaging UV rays of the sun, so our carvings can be hung outdoors. Please be aware, that even with the oiling, the carving will eventually gray out, as any cedar will, if it is placed in direct sunlight.   SIZE OF THE CARVINGS: The stock carvings are limited by the size of the board that starts the carving process. As the initial piece is 1 in. x 12 in., (in reality 3/4 in. x 11-3/4 in.) one side of the carving will be no greater then approximately 11-1/2 in.