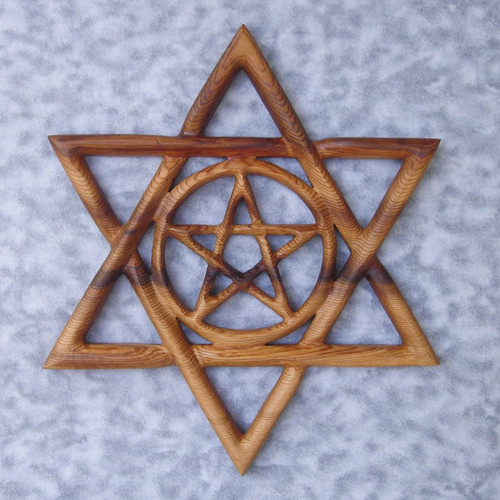 MEANING:  Combined symbols of mysticism, the 5 pointed Star within the 6 pointed Star, appeals to those of Jewish roots who find themselves embracing the old Druidic faith - Jewish American Pagans.  This is Cooper’s Kabbalistic Star.

PENTACLE: A Pentacle is an encircled pentagram. It contains and protects. The circle symbolizes the eternal cyclic nature of life. As it touches each point, it demonstrates the connectedness of all the elements; Spirit, Earth, Air, Water and Fire. A symbol of the holistic relationship between Human Spirituality and the Physical Universe.

STAR OF DAVID: Also called the Shield of David or the Magen David, is a recognized symbol of Jewish identity and Judaism.

Being an ancient symbol, it has appeared in other cultures over the eons. In Hinduism, the six-pointed star from two interlocking triangles is known as the Shatkona and is part of the symbology for the Heart Chakra.

And as symbols are in the eye of the beholder… we’ve had customers at our Texas shows declare this is the Jewish Texan Star… so there you go, another symbol is born!

John Lennon We All Shine On Wood Carving with Sunburst