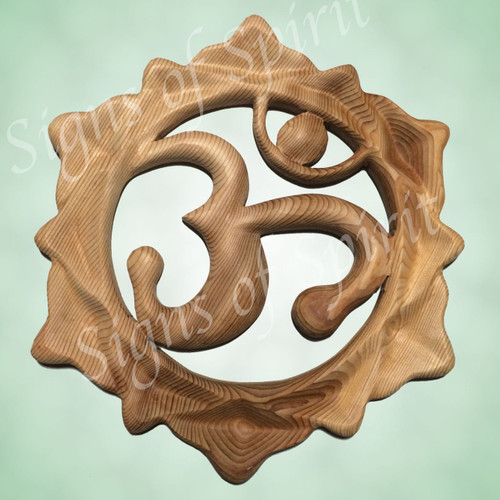 Coop is thoroughly delighted by way the grainline of the wood is different on each petal of the Lotus Blossom. As he says, I know how to carve it, but a higher power makes it happen!

OM: The sanskrit symbol of the sound of the Universe at total Peace. Om (also spelled Aum) is a Hindu sacred sound that is considered the greatest of all mantras.

The syllable Om is composed of the three sounds a-u-m (in Sanskrit, the vowels a and u combine to become o) and the symbol's threefold nature is central to its meaning. It represent several important triads:

Thus Om mystically embodies the essence of the entire universe.

This meaning is further deepened by the Indian philosophical belief that God first created sound and the universe arose from it. As the most sacred sound, Om is the root of the universe and everything that exists and it continues to hold everything together.

The Lotus: As a Lotus is able to emerge from Muddy Waters un-spoilt and pure it is considered to represent a wise and spiritually enlightened quality in a person; it is representative of somebody who carries out their tasks with little concern for any reward and with a full liberation from attachment. It is very interesting how the open flower and the unopened Lotus bud forms are associated with human traits. The unopened bud is representative of a folded soul that has the ability to unfold and open itself up to the divine truth. This is a beautiful gift for the yoga practitioner or meditator in your life!

THE CARVING: My Carvings are single pieces of western red cedar, designed and carved to be wall hangings. Each piece is finished with a blend of clear oils that brings out the natural color of the wood. For more information on the process of creation, please see my profile.

SIZE: One picture has the piece on a quilting board, lined up on the 1 inch marks. Follow the green lines to the left and bottom, subtract 1 inch from the height and width for the stock size. Measurements may vary slightly from piece to piece.

MSRP:
Was:
Now: $78.00
×
The pictures you see here are stock photos. What you get will depend on what we have in stock. If there are no others in stock, the time to shipping will be increased. If you desire and request something (for example) dark, we will pull the darkest board we have, but it will not necessarily be as dark as (for example) walnut would be. Western Red Cedar is the species from which roofing shingles, decks, and gazeboes have traditionally been made. It is resistant to mold, moisture, and insects. The oiling process also helps to block out damaging UV rays of the sun, so our carvings can be hung outdoors. Please be aware, that even with the oiling, the carving will eventually gray out, as any cedar will, if it is placed in direct sunlight.   SIZE OF THE CARVINGS: The stock carvings are limited by the size of the board that starts the carving process. As the initial piece is 1 in. x 12 in., (in reality 3/4 in. x 11-3/4 in.) one side of the carving will be no greater then approximately 11-1/2 in.