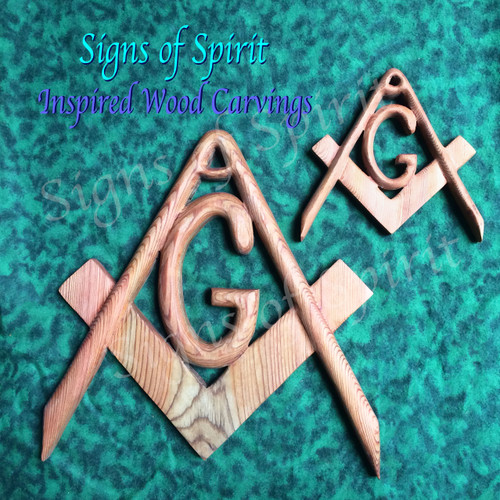 MEANING:  The carpenter’s square and a set of compasses joined together is the most identifiable symbol of Freemasonry. Both tools are Architect tools (of the medieval Operative stonemason) that are used in in the first three degrees of Masonic ritual as emblems to teach symbolic lessons.  Today’s Speculative masons (meaning philosophical rather than actual building), use this symbolism to teach moral and ethical lessons, such as the four cardinal virtues of Fortitude, Prudence, Temperance, and Justice, and the principles of "Brotherly Love, Relief (or Morality), and Truth" (commonly found in English language rituals).

The compass and the square represents movement towards perfection and a balance between spiritual (compass) and physical (square). This is the simplest meaning...as with any ancient symbol different groups (Lodges in this case) can develop different meanings or ways of expressing the meaning. While some Lodges don’t have the “G” in the Compass and Square, many English speaking countries do depicted this symbol with the letter "G" in the center.The letter has multiple meanings, representing different words depending on the context in which it is discussed. The most common is that the "G" stands for God, and is to remind Masons that God is at the center of Freemasonry. In this context it can also stand for Great Architect of the Universe or the Grand Geometrician of the Universe (a non-denominational reference to God). In a different context, the letter stands for Geometry, described as being the "noblest of sciences", and "the basis upon which the superstructure of Freemasonry is erected.”

The Compass and Square symbol is used primarily by the Blue, or Craft Lodges where initiates go through the first three degrees of Freemasonry, and the Master Mason.

This symbol is perfect for home or lodge decoration for the Mason in your life.

MSRP:
Was:
Now: $118.00
The pictures you see here are stock photos. What you get will depend on what we have in stock. If there are no others in stock, the time to shipping will be increased. If you desire and request something (for example) dark, we will pull the darkest board we have, but it will not necessarily be as dark as (for example) walnut would be. Western Red Cedar is the species from which roofing shingles, decks, and gazeboes have traditionally been made. It is resistant to mold, moisture, and insects. The oiling process also helps to block out damaging UV rays of the sun, so our carvings can be hung outdoors. Please be aware, that even with the oiling, the carving will eventually gray out, as any cedar will, if it is placed in direct sunlight.   SIZE OF THE CARVINGS: The stock carvings are limited by the size of the board that starts the carving process. As the initial piece is 1 in. x 12 in., (in reality 3/4 in. x 11-3/4 in.) one side of the carving will be no greater then approximately 11-1/2 in.