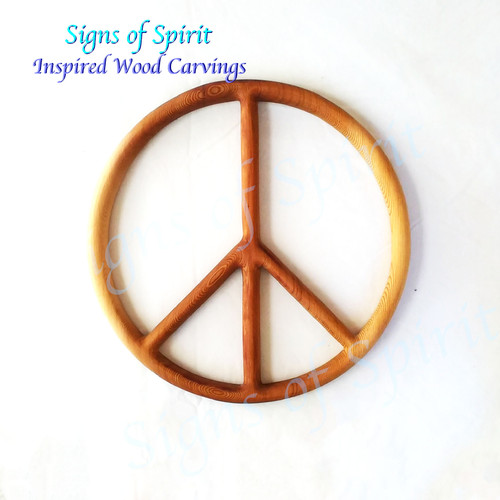 MEANING: What is peace symbol origin? The symbol of peace is formed from the semaphore for "N" and "D" for Nuclear Disarmament. In the 1950's the anti-nuclear movement saw the silhouette of a B-52 bomber in the symbol. Later taken up by the Anti-war activists during the Viet Nam era peace movement, and recently re-invoked: Peace! Coop likes to tell people at the shows, “I have been carving peace signs for 45 years. First they thought I was Hip! Then they said I was nostalgic. Then, they called me camp...but guess what? I’m Hip again!”

SIZE: The Full size is cut as large as we can from one board... usually 11 to 11.25 inches. The Medium size is based on an 8 to 8.5 inch circle. The Miniatures vary 'cause we don't want Coop to get bored! He does them anywhere from about 3 inches to 6 inches. The miniatures are too narrow to keyhole so they will have eye screws and string. If you need a specific size...or a no bigger than size...let us know when you order.

MSRP:
Was:
Now: $198.00
The pictures you see here are stock photos. What you get will depend on what we have in stock. If there are no others in stock, the time to shipping will be increased. If you desire and request something (for example) dark, we will pull the darkest board we have, but it will not necessarily be as dark as (for example) walnut would be. Western Red Cedar is the species from which roofing shingles, decks, and gazeboes have traditionally been made. It is resistant to mold, moisture, and insects. The oiling process also helps to block out damaging UV rays of the sun, so our carvings can be hung outdoors. Please be aware, that even with the oiling, the carving will eventually gray out, as any cedar will, if it is placed in direct sunlight.   SIZE OF THE CARVINGS: The stock carvings are limited by the size of the board that starts the carving process. As the initial piece is 1 in. x 12 in., (in reality 3/4 in. x 11-3/4 in.) one side of the carving will be no greater then approximately 11-1/2 in.