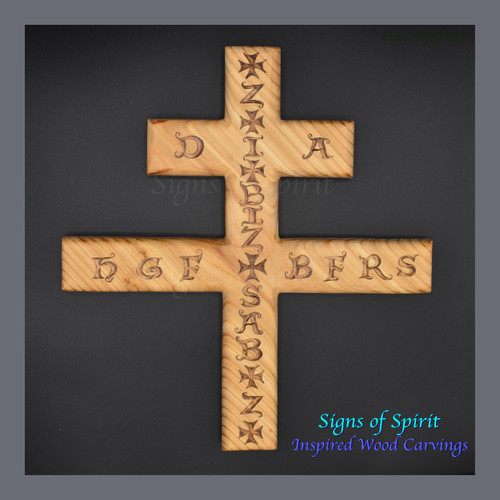 Coop’s Wood Carved Cross with Katrina’s Wood burning of Prayers. The Plague Cross with its prayers against the plague is having a resurgence.

MEANING: This Plague Cross is developed from Medieval European Textual Amulets.  They could be worn on the body or posted on walls to ward off evil.

Text and symbols in the plague amulet reinforced the promise of saintly intercession against the plague. ‘“Characteres’ interspersed with Latin crosses and configured in cruciform

Medieval liturgical formulas could be abbreviated by giving only the initial letter of each word. At the time this plague amulet was in use, clerics would have recognized the ‘characters’ as a shorthand for the Saint Zacharias Blessing.  Bernhard Sannig (1638–1704), a Franciscan theologian active in Prague, explained the text as a remedy against the plague. The legend was, that Saint Zacharias (d. 116 AD), bishop of Jerusalem, had collected this set of prayers against the plague, which were later written down on parchment as ‘characteres’, preserved in a Spanish monastery and recommended in 1546 at the Council of Trent for their efficacy.

MSRP:
Was:
Now: $98.00 - $118.00
The pictures you see here are stock photos. What you get will depend on what we have in stock. If there are no others in stock, the time to shipping will be increased. If you desire and request something (for example) dark, we will pull the darkest board we have, but it will not necessarily be as dark as (for example) walnut would be. Western Red Cedar is the species from which roofing shingles, decks, and gazeboes have traditionally been made. It is resistant to mold, moisture, and insects. The oiling process also helps to block out damaging UV rays of the sun, so our carvings can be hung outdoors. Please be aware, that even with the oiling, the carving will eventually gray out, as any cedar will, if it is placed in direct sunlight.   SIZE OF THE CARVINGS: The stock carvings are limited by the size of the board that starts the carving process. As the initial piece is 1 in. x 12 in., (in reality 3/4 in. x 11-3/4 in.) one side of the carving will be no greater then approximately 11-1/2 in.