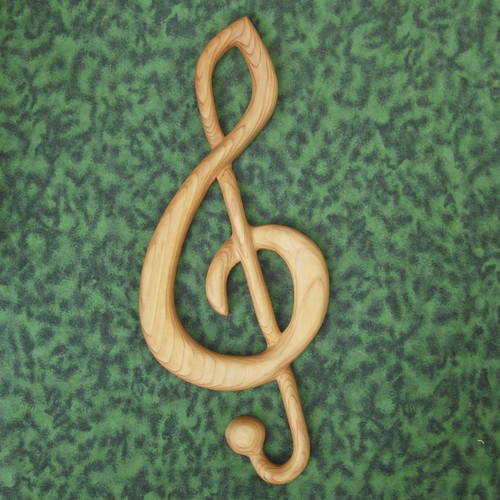 MEANING: Musical notation began around 900 AD, when songs became too difficult to memorize. At that time, songs were written in keys, or clefs, of C and F and later G. F Clef became our Base Clef; C Clef is our modern C Clef and the G Clef is now known as the Treble Clef.

A clef (from French: clef "key") is a musical symbol used to indicate the pitch of written notes. Placed on one of the lines at the beginning of the stave, it indicates the name and pitch of the notes on that line. This line serves as a reference point by which the names of the notes on any other line or space of the stave may be determined. Once a clef has been placed on one of the lines of the stave, the other lines and spaces can be read in relation to it.

This is a great gift for a music lover, musician or music teacher!

THE CARVING: Our carvings are single pieces of western red cedar, designed and carved to be wall hangings. Each piece is finished with a blend of clear oils that brings out the natural color of the wood. For more information on the process of creation, please see my profile.

MSRP:
Was:
Now: $200.00
The pictures you see here are stock photos. What you get will depend on what we have in stock. If there are no others in stock, the time to shipping will be increased. If you desire and request something (for example) dark, we will pull the darkest board we have, but it will not necessarily be as dark as (for example) walnut would be. Western Red Cedar is the species from which roofing shingles, decks, and gazeboes have traditionally been made. It is resistant to mold, moisture, and insects. The oiling process also helps to block out damaging UV rays of the sun, so our carvings can be hung outdoors. Please be aware, that even with the oiling, the carving will eventually gray out, as any cedar will, if it is placed in direct sunlight.   SIZE OF THE CARVINGS: The stock carvings are limited by the size of the board that starts the carving process. As the initial piece is 1 in. x 12 in., (in reality 3/4 in. x 11-3/4 in.) one side of the carving will be no greater then approximately 11-1/2 in.