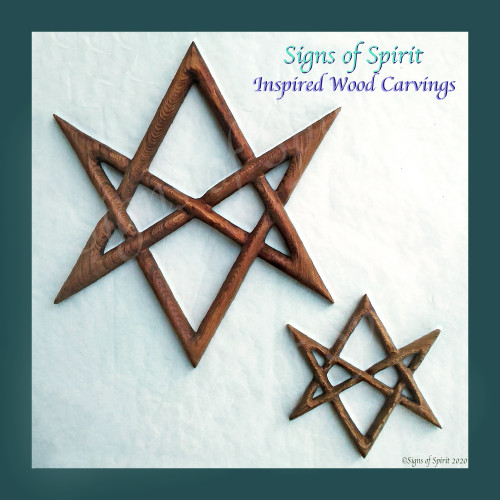 The unicursal hexagram is a hexagram or six-pointed star that can be traced or drawn unicursally, in one continuous line, rather than by two overlaid triangles. Our carving is an interlaced form with the lines of the hexagram passing over and under one another to form a knot.

The symbol was devised by the Hermetic Order of the Golden Dawn, and later adapted by Aleister Crowley as a device of personal significance. It is often worn by Thelemites (Thelemic Order of the Golden Dawn) as a sign of religious identification and recognition.The unicursal hexagram was created for the purpose of drawing the figure in one continuous movement, as the other magical polygons are created- the pentagram is one example. This is significant in ritual magick when invoking and banishing hexagrams must be made. Crowley’s adaptation of the unicursal hexagram placed a five petaled rose, symbolizing a pentacle (and the divine feminine), in the center; the symbol as a whole making eleven (five petals of the rose plus six points of the hexagram), the number of divine union.

The Unicursal Hexagram has made appearances in popular culture:

In the TV show Supernatural, it is known as the Aquarian Star.  This symbol is used to signify membership of the “Men of Letters” and represents great power and The Gates of Atlantis.

It has appeared in various Manga (Yu-Gi-Oh!), and Anime (Rental Magica)and Video games (Heroes of Might and Magic V)